#Which coaching Institute I should join for NDA ?#

#  Hi  Students  Nda coaching institute in Laxmi Nagar, Delhi  has emerged as a great hope for aspirants preparing for  Defense Services examination conducted by U. P. S. C. #
Nda entrance is conducted in two tiers, the first tier is called written test and second is called S. S. B. Once the candidates are recommended for on the fifth day called Conference day, they are sent for Medicals. Once you have cleared Medicals, you are appointed as per vacancies.
Eligibility for Nda is age between sixteen and half to  Nineteen years. Qualifications required to appear in the examination is 12th appearing  or 12th pass. Girls are now allowed in Nda. There is no reservation to socially and educationally backward sections in Nda. Selection is entirely on Merit basis.
For preparation of Nda written and Ssb coaching you can join Brilliant academy of Learning situated in U112, 2nd Floor, Vidhatha House, shakarpur, Laxmi Nagar Metro Station Gate no. 3, Delhi.

http://www.brilliantacademyoflearning.com/institueforndanavyairforceinlaxminagar.html
Brilliant academy of Learning is the best among all the coaching institutes in Delhi, India due to following features :
Highly experienced teachers
Best study materials updated time to time as per changing question patterns
Cooperative Management which is ready to help students whenever needed
Systematic and scientific teaching methodology as per requirement of every student
Brilliant tests are conducted in the coaching institute strictly in examination conditions.
Doubt classes and backup classes are available according to needs and timings of students.
Along with preparation for Nda written test , Ssb  guidance is also provided .
Motivational and Inspirational classes by successful Brilliantians and Retired  Army Officers is another great attraction.
So join Brilliant academy of Learning for brilliant success in Nda.
Best of luck to aspirants. 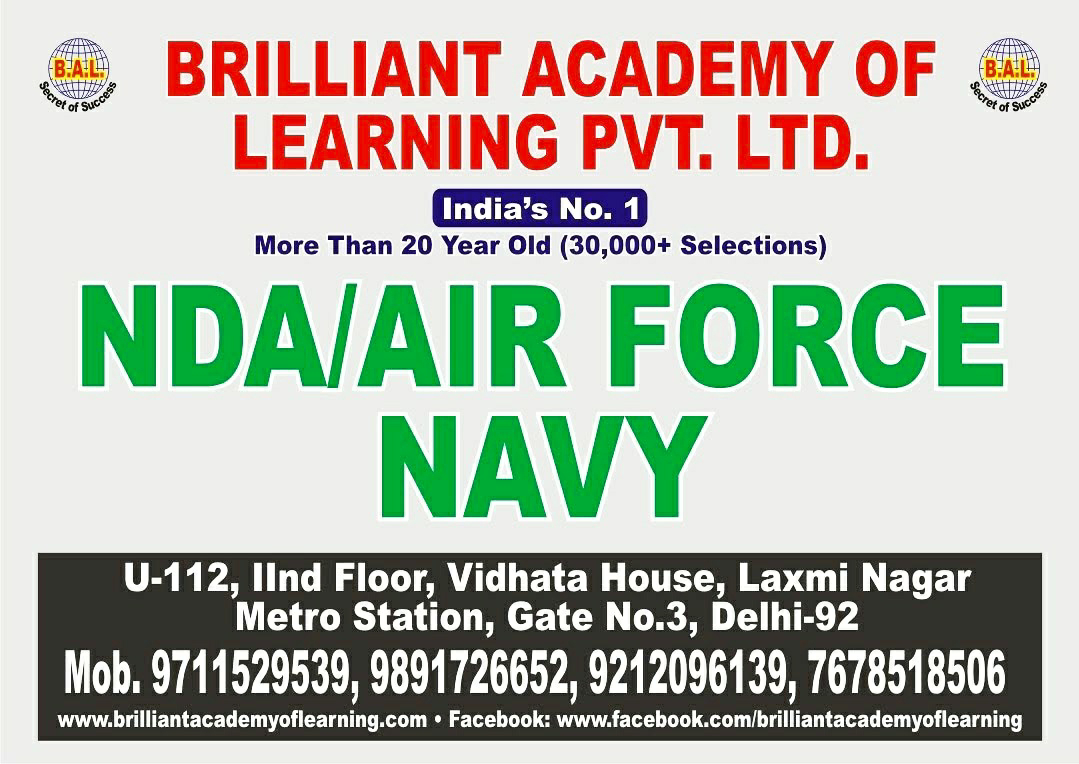